Brief history of the Vine, Wine and

The Vine, Wine and Wine Label Museum - Château d'Aigle has in its collections over 10,000 objects that relate to or illustrate the world of vine and wine as well as the associated trades. This is the result of over 50 years of work to safeguard a heritage that was about to disappear. To this is added a collection of wine labels that exceeds 400,000 individuals.

Of course, only a tiny part of these sets are exhibited in the institution's rooms. However, as we are aware of their heritage importance, the institution highlights them in the context of temporary exhibitions that tend to focus on what seems to be its specificity at the global level: wine labels.

See the collections
A creation by the

In the 1950s, François Cuénoud, creator and first governor of the Confrérie du Guillon (the wine brotherhood that illustrates and defends Vaud wines), thought that the Canton of Vaud needed a Maison de la vigne et du vin (Vine and Wine House) that would house a vine and wine museum, along with premises that will help the promotion of Vaud wines.

At the Swiss national exhibition of 1964, which took place in Lausanne, the display ``La Chaîne du vin`` presented a collection of objects that the Confrérie du Guillon bought for this museum, which had yet to be created. From the following year omward, other purchases and legacies completed this future institution.

As explained in the presentation brochure of the future museum, its mission will be to exhibit the oldest and most diverse objects. As a matter of fact, the evolution of mechanisation is causing a quantity of tools to disappear very quickly, each with its own poetry, and future generations will only have this memory. In 1967 a suitable place was found for the future exhibition: the Château d'Aigle.

There is a true civilisation of wine that knows no race or border. The Vine and Wine Museum will be Vaudois by its location; on the other hand, it will endeavour to present the universal aspect of the vine and its history; it will receive and exhibit witnesses from all times and all origins. 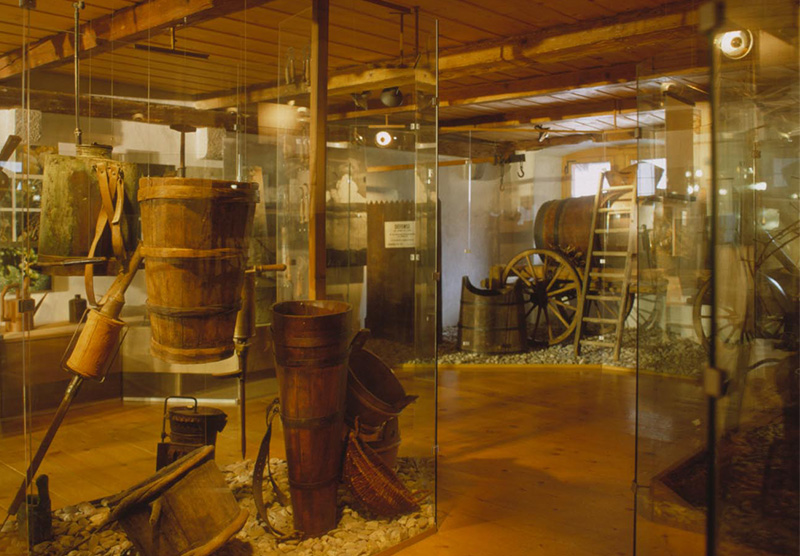 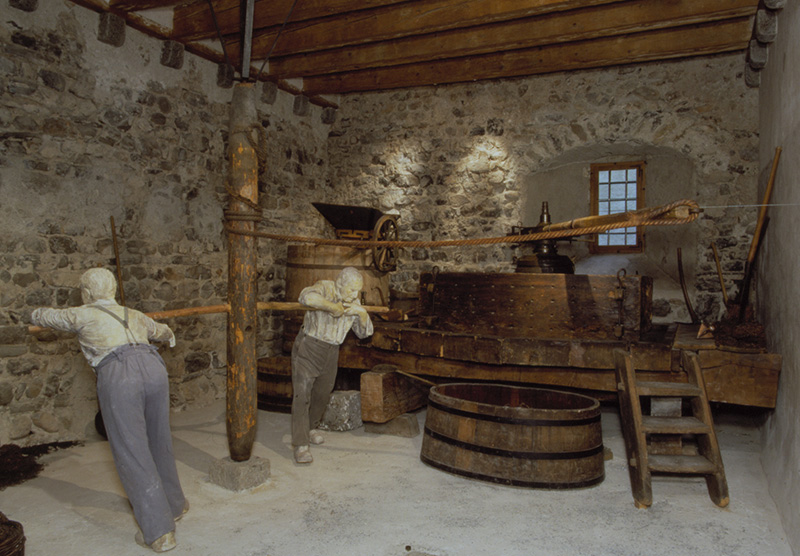 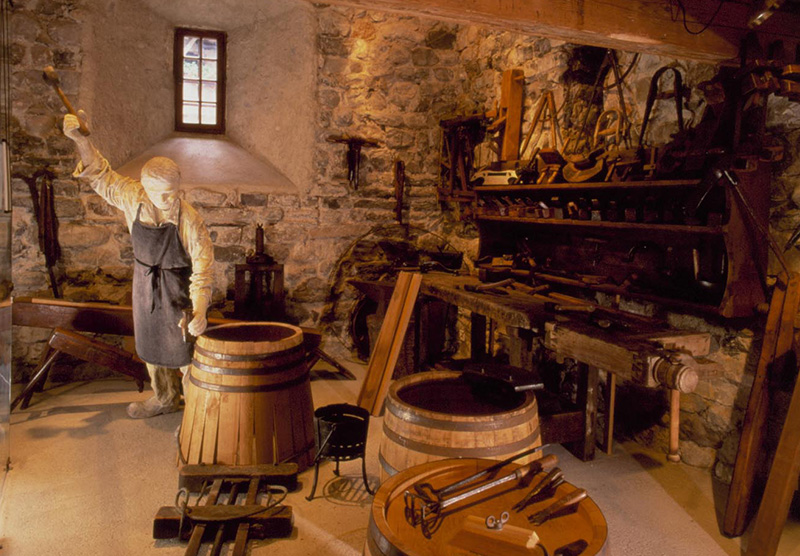 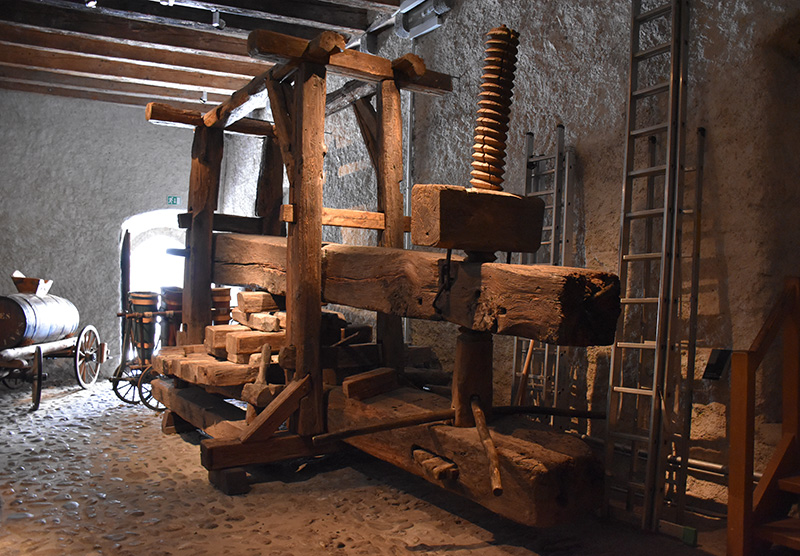 A MUSEUM OF ARTS AND FOLK TRADITION

A project inspired by the Burgundy Wine Museum opened in 1946 by Henri Lagrange and the museographer Georges-Henri Rivière was defined. Then, on January 19, 1971, the Vaudois vine and wine museum was founded by the Confrérie du Guillon with the support of all the wine-producing communities of the Canton of Vaud.

A large collection of winegrowers has allowed us to gather an important series of viti-vinicultural objects. But, starting from the principle that it would be wrong to believe that a vine and wine museum is intended to present only a press, pannier, viticultural tools or cellar containers, purchases, gifts and loans make it possible to develop the collections in all the fields related closely or by far with the vine and the wine.

Paintings, engravings, sculptures, bottles, carafes, glasses, porcelain, corkscrews, ... All of the above enhance a set that will be presented at the Château d'Aigle from 1975 in a museography highlighting the arts and popular traditions.

In 2004, the International Wine Label Museum combined its collection of over 400'000 wine labels with that of the Musée Vaudois de la Vigne et du Vin.


The Faces of Wine, our database, contains over 1000 different labels.

CHECK THE DATABASE
Since 2010,

A MUSEUM OF IDEAS

Since 2010, the museum has taken on new challenges, adapting to the times and the expectations of its visitors. From a museum of objects it has become a museum of ideas. The exhibition has changed radically: it is interactive, fun and educational. It is based on current practices in the world of vines and wine in our regions, it evokes the landscape and the environment without forgetting history and ethnography.

In 2013, a special room was dedicated to the wine labels, then other rooms were fitted out to receive temporary exhibitions intended to highlight the collections of what became the Vine, Wine and Wine Label Museum. 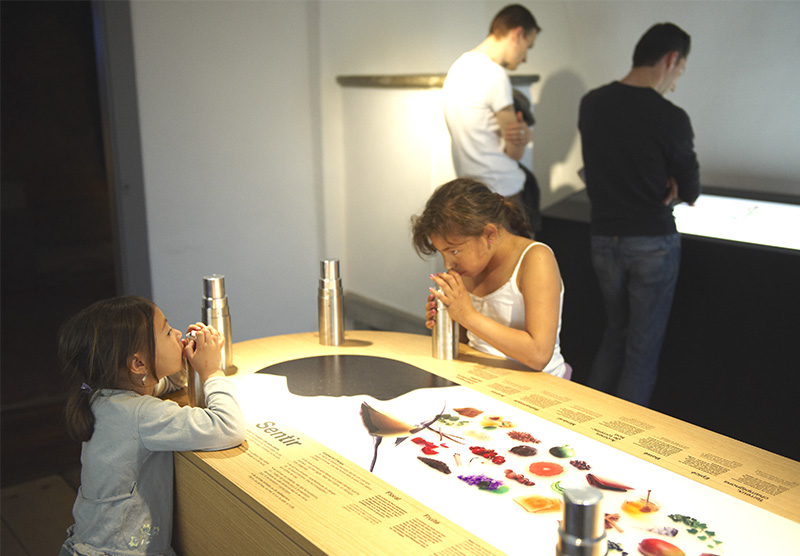 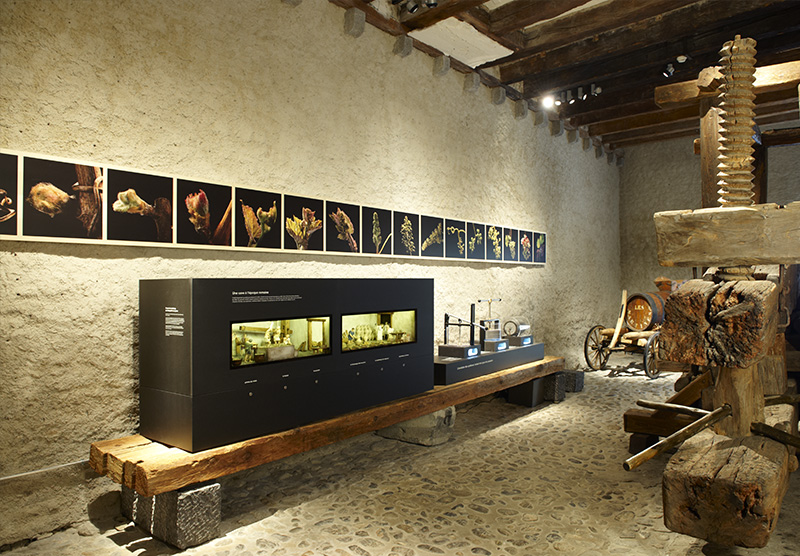 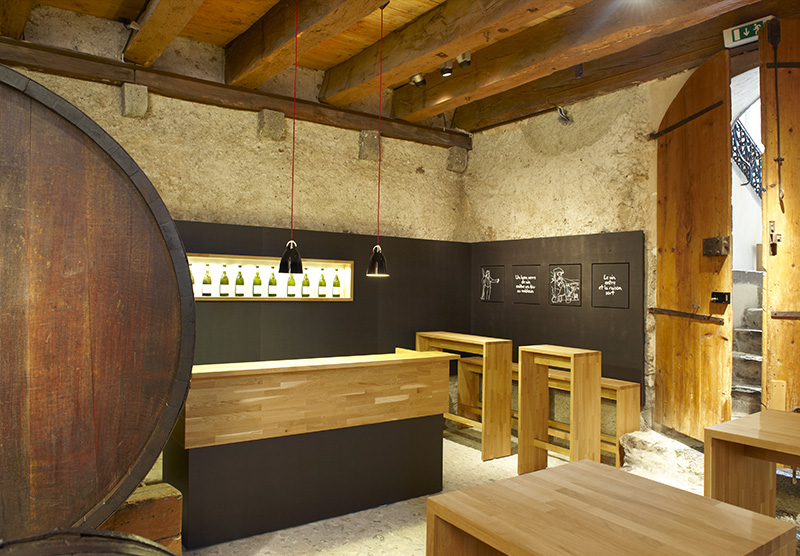 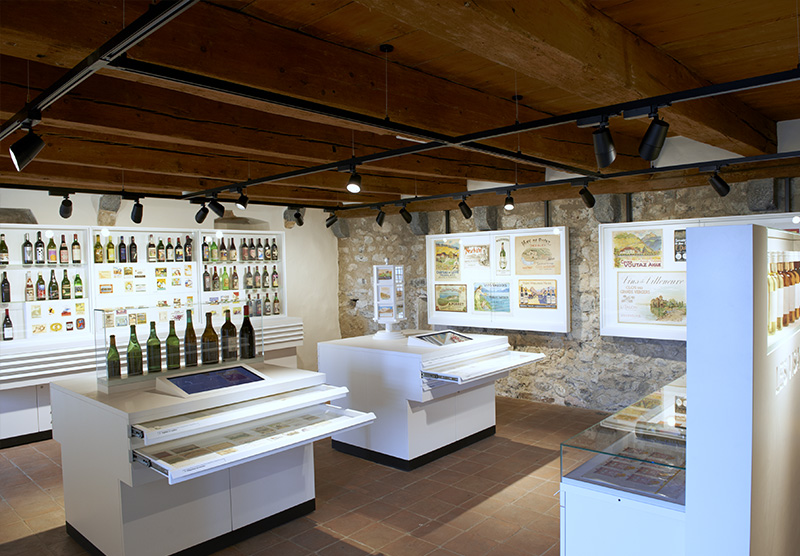 The Vine, Wine and Wine Label Museum – Château d’Aigle elaborates on a programme of annual temporary exhibitions designed to showcase its rich collections. Thus, the objects and documents it possesses continue to tell their own stories, those of the men and women, winegrowers, coopers, glassmakers, wine-drinkers, artists, etc., who have built our villages, shaped our landscapes, and who, in the end, all praise the Chasselas, this grape variety which, according to the latest research, originated on the eastern shores of Lake Geneva.

The associated trades, cooper, glassmaker, bistro, ... as well as quirky objects, a biscuit mould in the shape of a bunch of grapes, a decorated cup ... The out-of-placel, the precious or even the seemingly banal. The museum's collections take you from one surprise to the next. 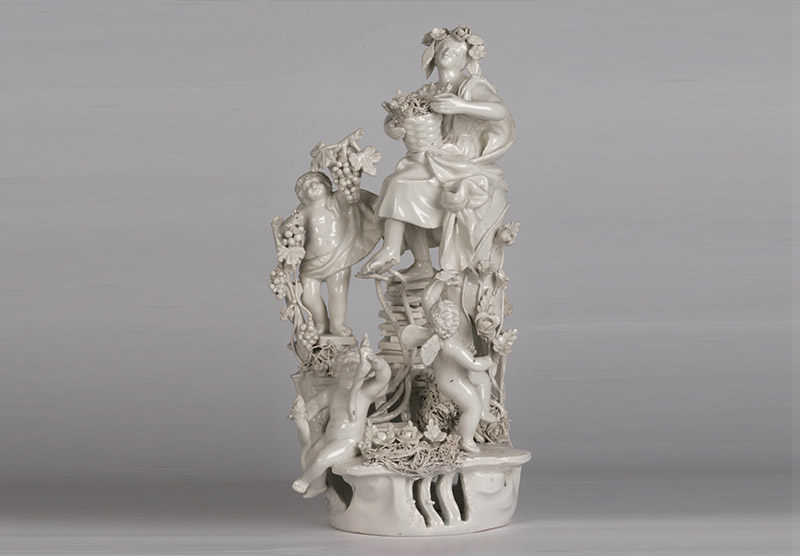 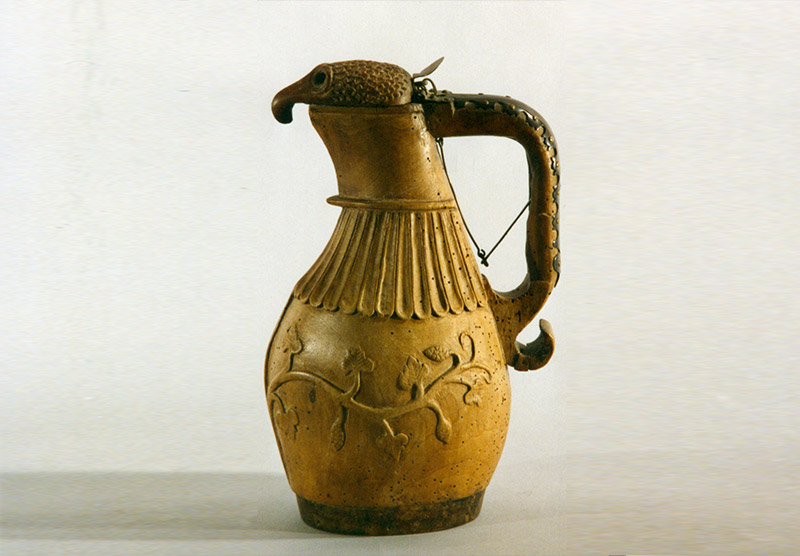 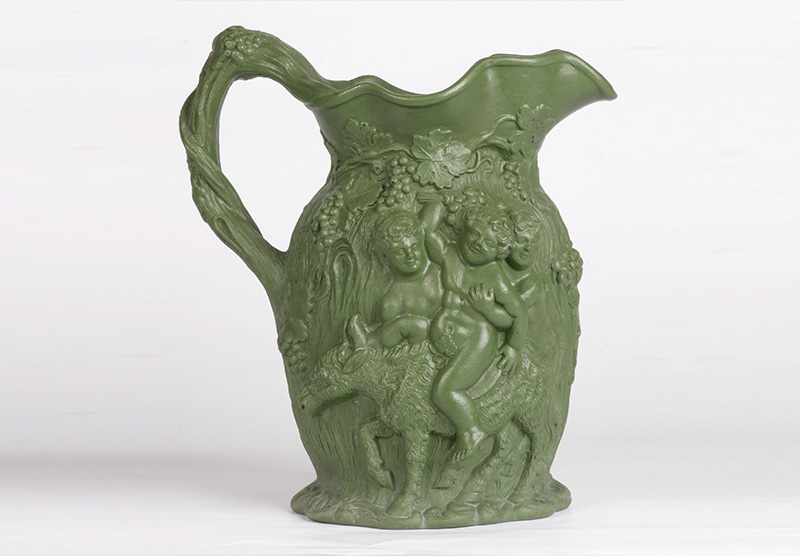 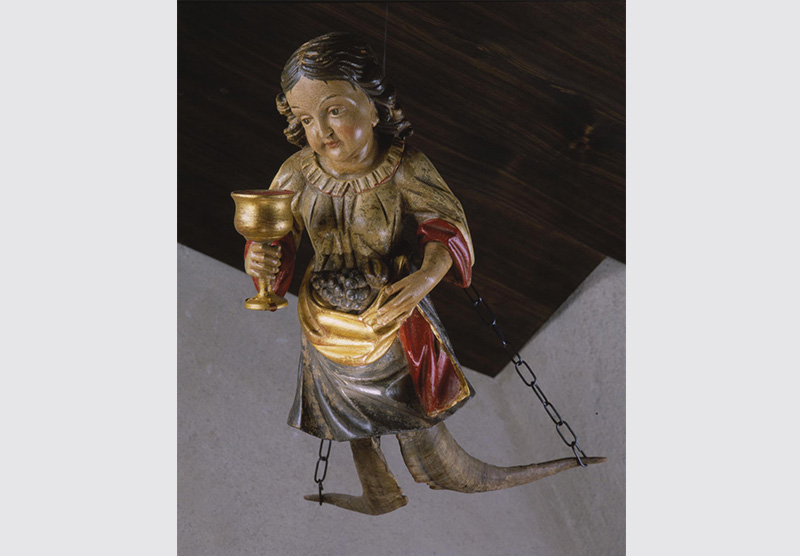 Vines, wine and drinkers have always been favourite themes in imagery. Drawers and artists have enjoyed illustrating wine objects, vines and landscapes. People confronted with wine, especially drinkers, remain a recurrent reason for humour. And let us not forget Bacchus, his procession and his companions. He was worshipped as a god and is present in the art of Greek and Roman antiquity. As a symbol of drunkenness and its excesses, he has been one of the highlights of Western drawing and sculpture since the Renaissance. 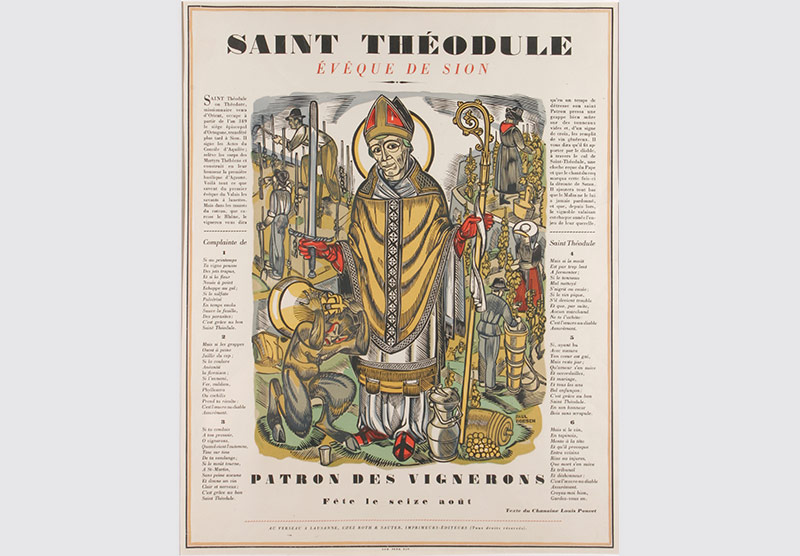 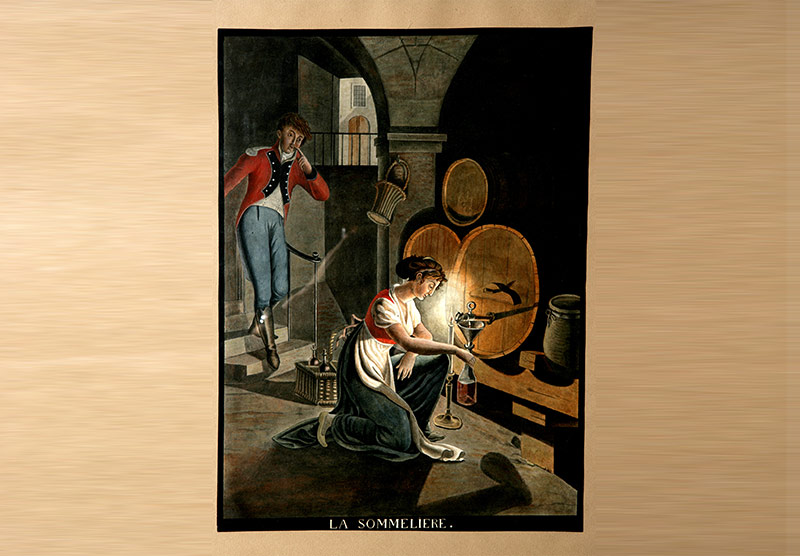 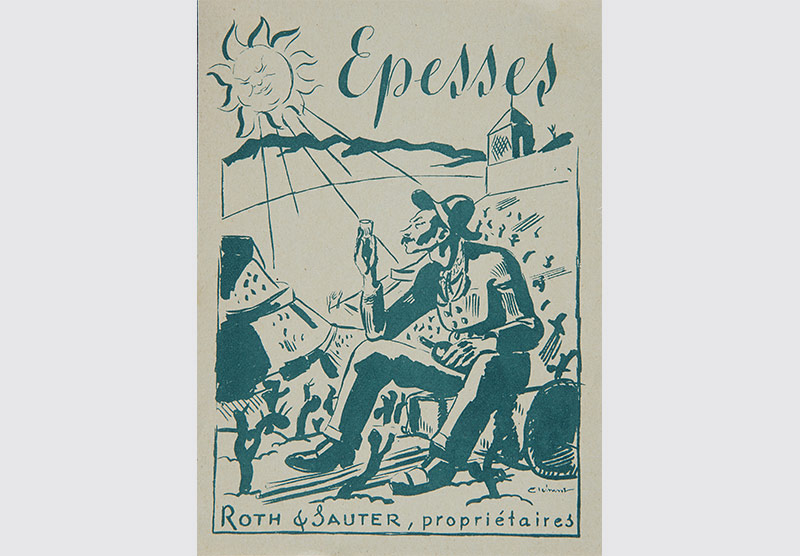 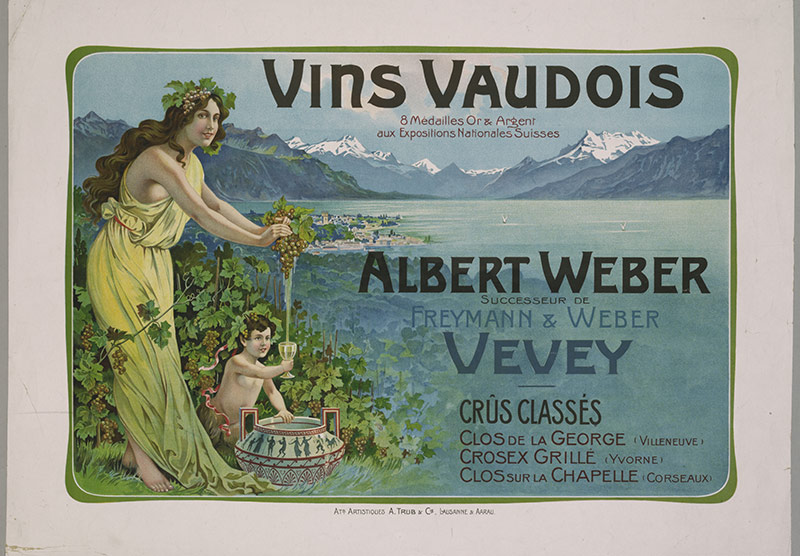 Bottles, corkscrews, glasses, carafes, flasks, ... Beautiful and sometimes unusual objects, but also everyday objects. Each way of drinking has its own shapes and materials. 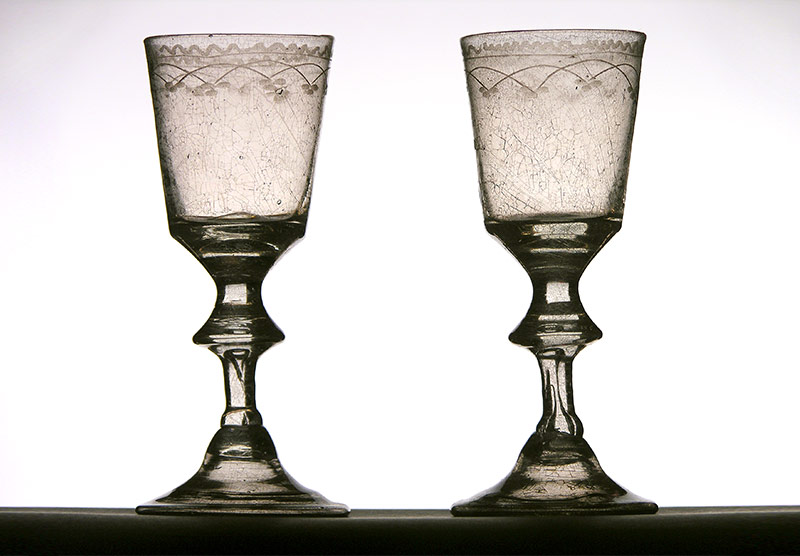 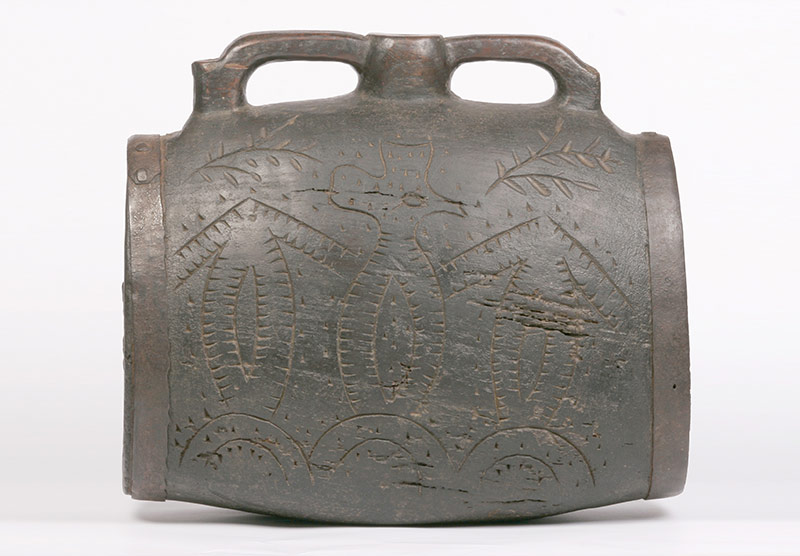 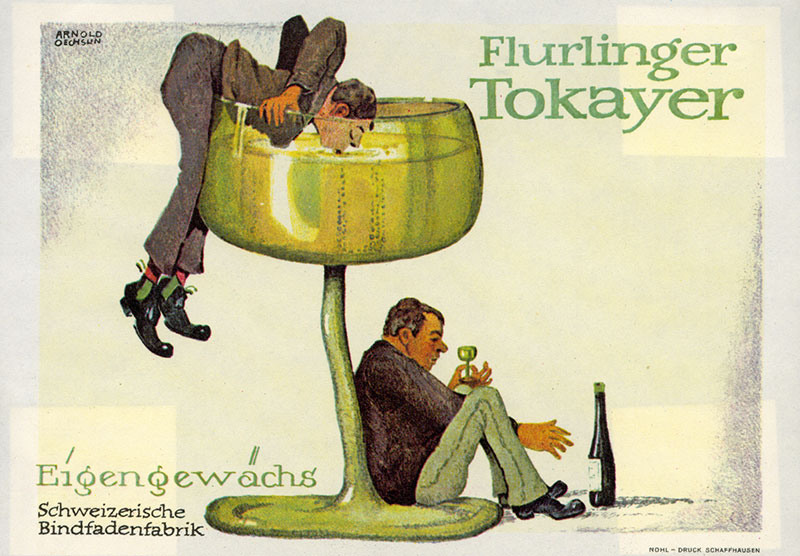 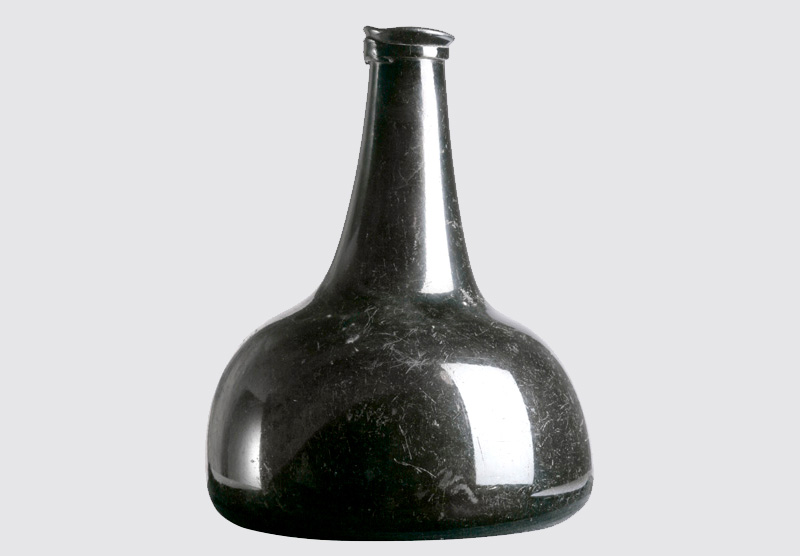 THE WINEGROWER AND HIS WORK

Vine and wine items are deeply rooted in their place of origin. Most of them come from the vineyards of the canton of Vaud and mark in their own way the specificities of each region of the canton. Other objects come from Europe or even further away. If they are different, it is often due to cultivation practices or because the terrain, its slope, its structure require a particular tool. In any case, what is striking is the inventiveness of man, his technical intelligence which allows him to adapt his tools to his soil and his needs. 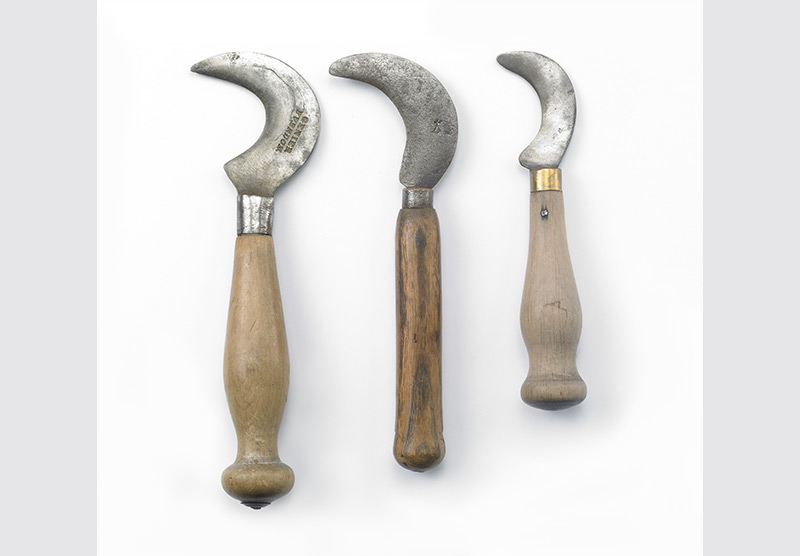 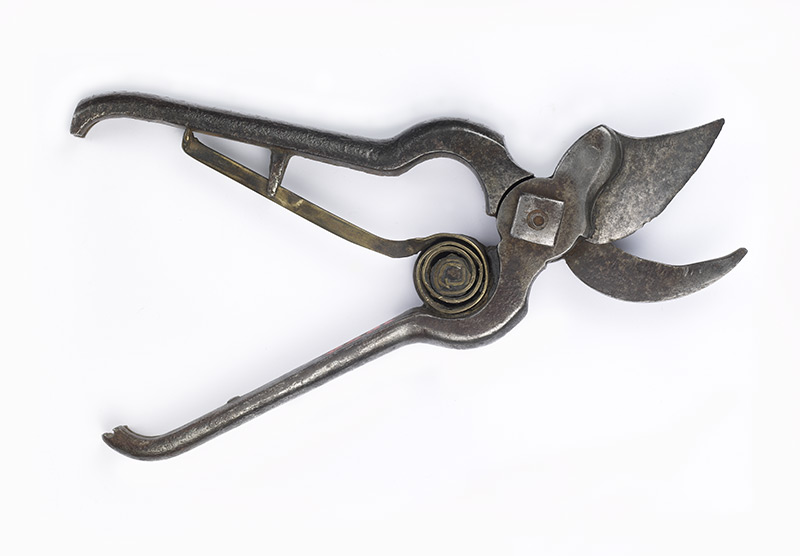 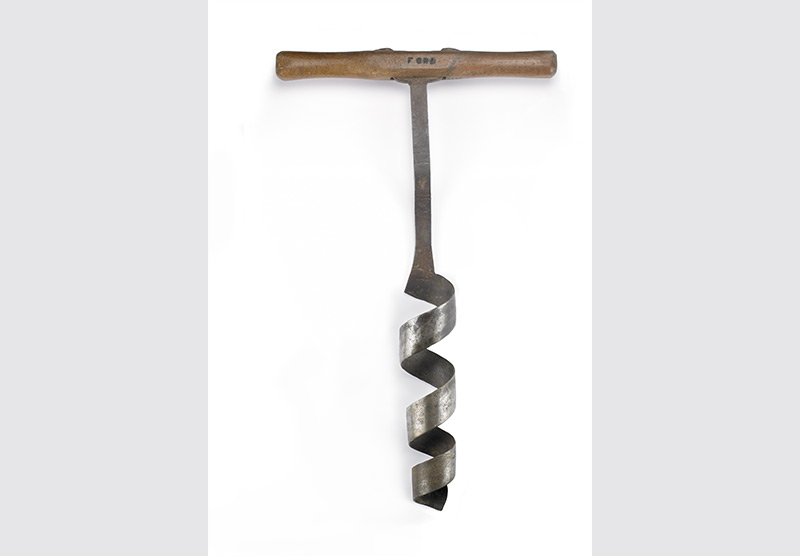 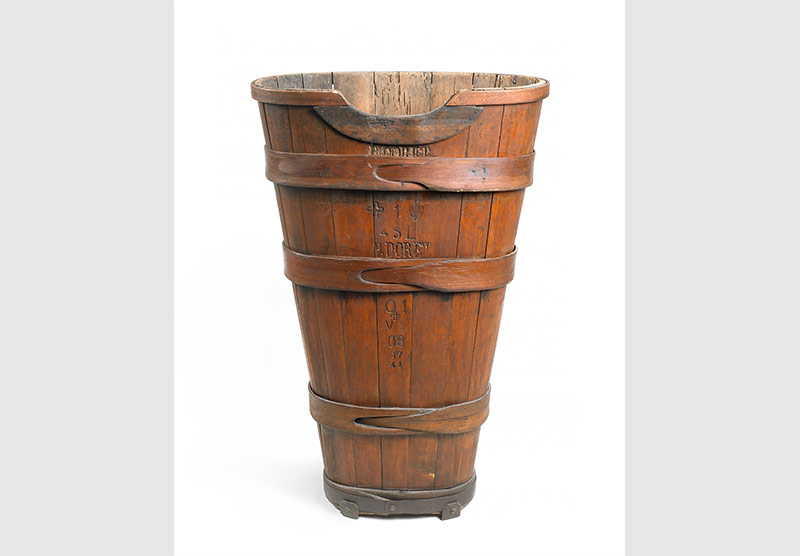 Brante for the harvest

The museum's labels come from all over the world. Souvenirs of prestigious bottles or distant journeys, they tell history in their own way and allow us to know the extent of the wine civilization in the world.

The wine label is both a business card and an advertising poster for the winemaker. The diversity of styles and graphics is truly astonishing. Reflecting the collective imagination and strongly marked by its time, the wine label, daughter of its time, bears witness to the relationship that man has with wine. 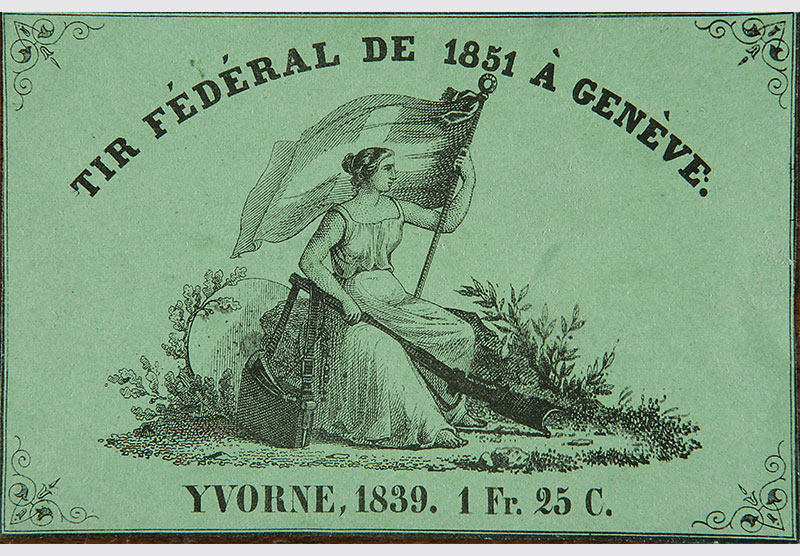 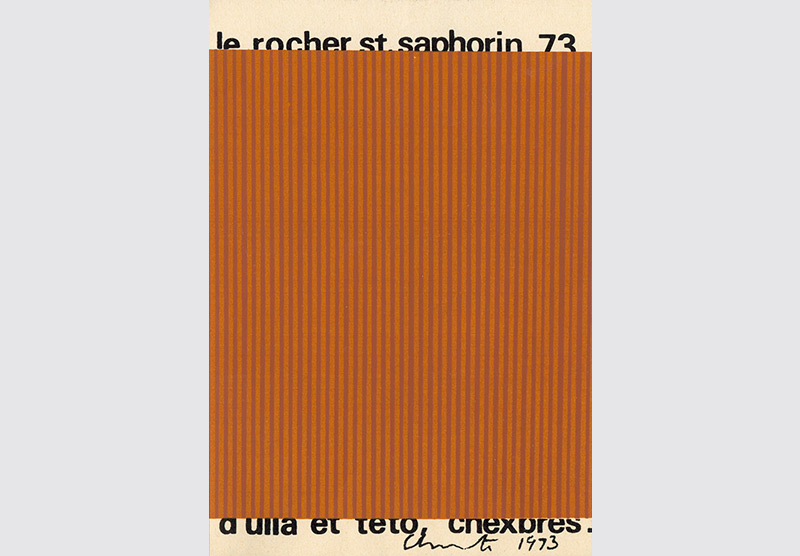 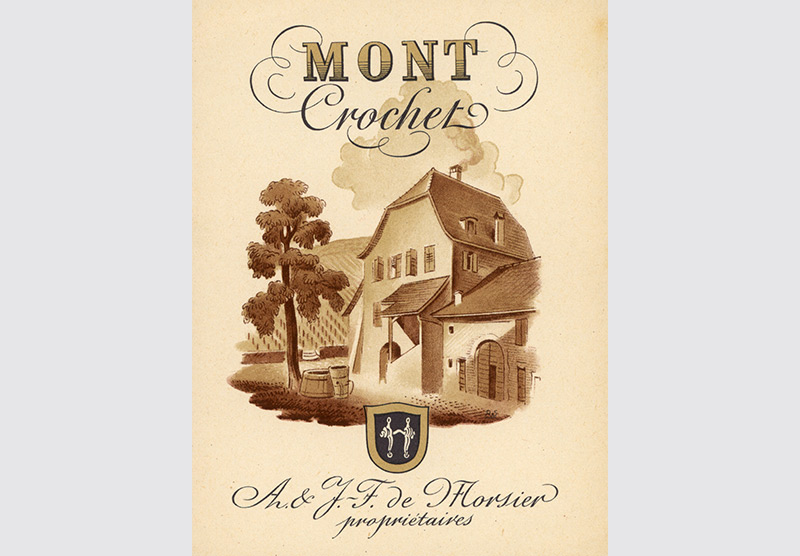 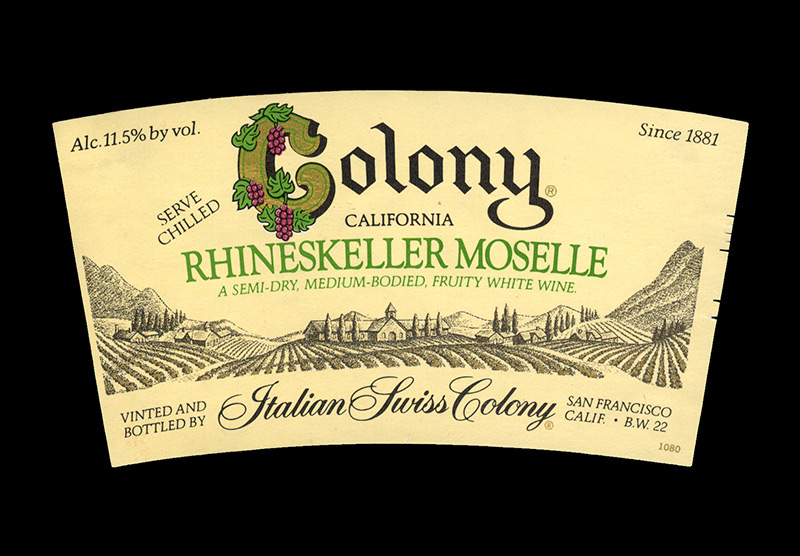 Today, the museum presents six permanent exhibits, which will allow visitors to learn while having fun.

It is of course that of the place where the museum is located, that of the Château d'Aigle, surrounded by vineyards from the beginning..

This is a film with spectacular aerial images of wine harvest in the magnificent landscapes of the Chasselas triangle, located between Geneva, Biel and Sierre. It pays tribute to the men and women who have shaped our vineyards for centuries.

These are interactive laboratories that show how the winegrower cultivates his vineyard, how he makes his wine. It also brings to mind the plants and animals found in the vineyard as well as the different soils where the vine grows. It is also an opportunity for the visitor to exercise his senses, to learn to taste the wine and to recognize its aromas.

This exhibit pays tribute to a famous French artist of the 19th century, Honoré Daumier, who in his drawings mocks both the winegrower and the bourgeois in the vineyard, the wine consumer as well as the counterfeiters and other smugglers.

An exhibition-show dedicated to the celebration of vine and wine as it can be experienced in the Canton of Vaud. Two films present a ressat (banquet) of the Confrérie du Guillon, which associates Vaud wines with high gastronomy, and the 1999 Fête des Vignerons of Vevey, a festival that pays tribute to the workers of the vineyard.

Paintings, engravings, drawings, photographs: the label is unique, like a person or a signature. Nearly 1'000 wine labels presented by themes, comics, politics, bawdy scenes, artists, landscapes of the world, ... but also bottles of wine and billboards all gathered to proclaim: ``I am the best wine in the world``.